When our council was formed, there was a lot of discussion as to who our council should be named after.  Several founding members suggested St. Michael as he is the patron saint of the military.  A vote was taken and it was unanimous.  Eventually we were approved to be Saint Michael the Archangel Council 14773, the second military council in Georgia with St Michael as their patron saint, the other being at Ft Benning. 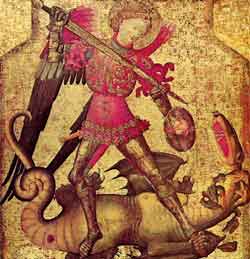 St. Michael is one of the three angels mentioned in scripture along with Gabriel and Raphael. His name appears twice in the Old Testament and twice in the New Testament. The tradition of the Church’s devotion to him mainly comes from the book of Revelation 12:7 “And there was a great battle in heaven, Michael and his angels fought with the dragon.” Because of this, art depicts him with a sword and defeating a dragon.
Throughout the history of the Church he has performed four main missions:
1. To defeat Satan.
2. To rescue the souls of the faithful from the power of the enemy, especially at the hour of death.
3. To be the champion of God’s people both in the Old and New Testament.
4. To call from earth people at the hour of death to the judgment seat of Jesus Christ.
St. Michael is a powerful help in overcoming the cunning work of evil in people’s lives. His name means, “Who is like God?” which is meant to be rhetorical, since the answer is no one is like God, in his goodness, love, power, and truth. This humble name and attitude of Michael is to combat the arrogance of Satan who went against God’s plan to save mankind and claimed to be like God. Scripture gives us a peek into these combating spirits and reminds us that there is a fight to do the will of God, and invisible powers are at work for our salvation.  Their leader, St. Michael, is always successful.

For those in the Military, St. Michael acts as a tuning fork to help them tune into the real battle between truth and lies, love and indifference, life and death. There is a battle going on that we cannot see and each of us is on the front lines. The first tactic of the enemy is to convince us that the devil, angels etc. are ancient legends and do not exist. St. Michael’s prayers and help can prevent us from disbelief and be the strength we need to fight against the lies, indifference, and death that weighs in on us.

St. Michael the archangel, pray for us.

Prayers
This prayer used to be said at the end of every Mass, and John Paul II asked that the faithful still say it often to find help in fighting the powers of darkness.

Saint Michael the Archangel, defend us in battle. Be our protection against the wickedness and snares of the devil. May God rebuke him, we humbly pray; and do Thou, O Prince of the Heavenly Host -by the Divine Power of God - cast into hell, satan and all the evil spirits, who roam throughout the world seeking the ruin of souls. Amen.

Learn More About The Founder of The Knights of Columbus, Reverend Michael J. McGivney